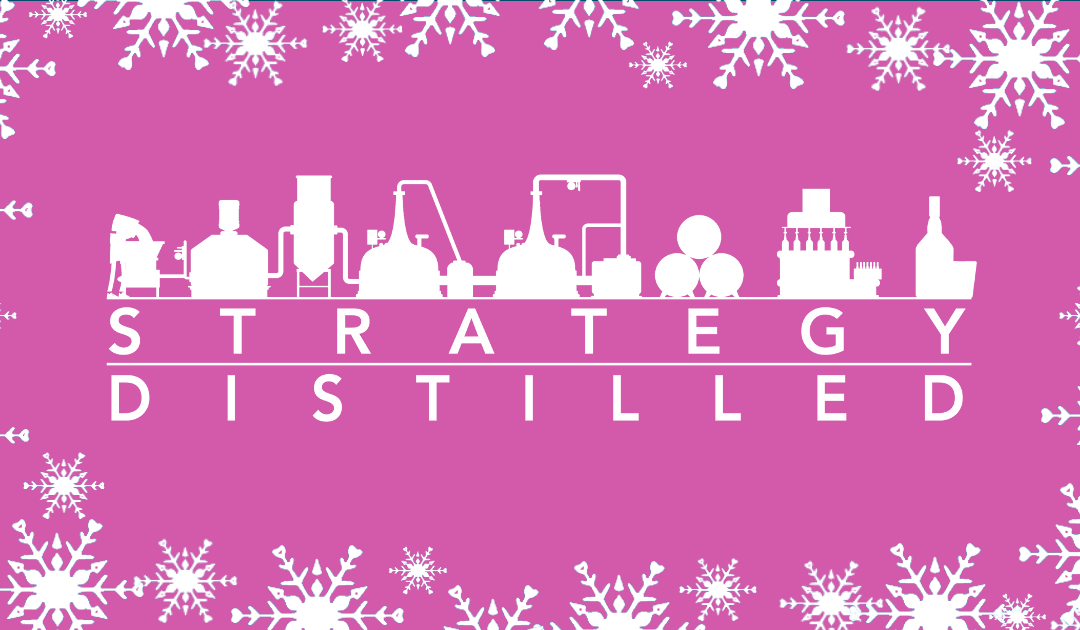 Distillations in this newsletter: Why you should aim to write a minimus opus rather than a magnum opus.

A monthly concoction of insight, learning and things you might have missed for anyone who works on strategy, works with strategy or just loves strategy.

Would you rather listen to this newsletter as a podcast?

… don’t aim to write your magnum opus, go for a minimus opus instead.

If you enjoy reading this newsletter, don’t forget to forward it to friends or colleagues who might also find it of interest.

Discover the content of past issues of Strategy Distilled.

Don’t aim to write your magnum opus, go for a minimus opus instead

I’m writing this the day after the Winter Solstice, here in the Northern Hemisphere. It’s the new dawn leading into a new year. This period before Christmas is often a period of calm. The flurry of workshops and reports that clients always want before the break are all done and the individuals I work with are either on holiday or having a quiet moment to themselves. Knowing that I would have a week or two over Christmas and a week after the start of the New Year before client commitments ramped up again, I decided to write a book. What was I thinking? Three weeks! The last one (The Strategy Manual) took me six months. Yet, one week in, I’m almost half finished. Let me explain.

I believe we all have two types of book in us. The first type is our magnum opus. This is Latin for ‘great work’ and it is generally taken to be the distillation of our life’s work. I don’t believe it needs to be a whole life’s work; but it does need to be the fruits of many years’ labour. I spent about ten years working in the field of product design and at the end of it, in 1995, I wrote my book Product Design: Practical Methods for the Systematic Development of New Products. Now magnum opus sounds very grand, if not grandiose. My intention with Product Design, however, was almost the opposite. I didn’t want to celebrate the magnificence of product design. I didn’t want to honour the magical genius of the product designer. I wanted to de-mystify the process. To make it accessible. I wanted to show that designing products, like most works of apparent genius, was the result of a lot of hard work by a lot of different people, coming together in harmony. Simplifying the complex is, in my mind, ‘great work’ to strive for. ‘Great’ in the sense of magnitude (as opposed to accomplishment) because a substantial amount of experience is needed in any discipline before its complexity is mastered and then practiced to the point that its underlying simplicity begins to reveal itself. These were the lessons ringing in my ears when I started to write The Strategy Manual. I had read a lot of strategy books. Many I loved. Some not so much. But I came away with a sense of frustration that took many years to crystalise in my mind. Eventually, I worked out that most strategy books are about the ‘why’ and the ‘what’ of strategy. Few were about the ‘how’. Or at least not the really down-to-earth practicalities of how to produce a strategy, how to get it adopted across an organisation and then how to adapt it as circumstances change. That was it – the spark had been struck! Once I realised such a book didn’t exist, I just had to write it. Fortunately, by this time I’d been consulting on strategy for over ten years and so the simplicity underlying much of the apparent complexity of strategy was beginning to reveal itself. For those of you familiar with The Strategy Manual, you may think that 440 pages is not really THAT simple but since it distills the lessons I learned from the 10,000+ hours of consultancy I have done and the 15,000 pages of writings on strategy that I’ve read (that’s the 50+ strategy books on either my bookshelf or digital books on my phone and laptop) it’s not a bad start.

The second type of book we all have in us is a minimus opus. Literally this translates to ‘the smallest work’. I first became interested in this idea when books on big history started to go mainstream: Bill Bryson’s A Short History of Nearly Everything in 2003, David Christian’s Maps of Time in 2005, Cynthia Stokes Brown’s Big History in 2007. I was completely blown away by the idea of history, not of the Roman Empire, or Tudor Britain or the First World War, as I’d thought of it previously, but of everything from the big bang to the present day. These were, as you might expect, big books. Both Bryson’s and Christian’s were just shy of 700 pages. At the time, both my kids were under 10. I wanted to share with them my excitement about the notion of big history but the resources available to me didn’t make great bedtime stories. So, I came up with a challenge for myself. What is the shortest meaningful way to tell the story of big history? This became somewhere between a hobby and an obsession for me for several years. In 2012 I published How The World Came To Be, the most slender book possible, explaining the origins of planet Earth in as few as 32 pages and 3,500 words. In 2013, I published two more slender editions in what was turning into a series of books offering distillations of knowledge that might otherwise take weeks to acquire – How Life Came To Be and How People Came To Be (copies available on request).

Fast-forward to the end of 2022. I have three weeks to fill, and a sense that two ideas are coming together in my mind. The idea of tackling something complex and making it simple, but doing so in a small way. So, not attempting to cover an entire discipline, like product design or strategy, and not taking six months to complete it. The question was, could I take the idea of a minimus opus and apply it to my professional writing? Well, I guess you will find out in the next newsletter at the end of January, because I plan to have it finished by then, but here is the story of it so far.

I’d written about the relationship between organisational values and strategy a couple of times in this newsletter (Nov 2021 and Sept 2022). These processes of thinking and writing about values combined to persuade me that I might have just found a Clark Kent of the strategy world: something seemingly innocuous and often overlooked which turns out, upon closer inspection, to have superpowers. Resolving the core values of an organisation, I now believe, is a forcing function that helps to resolve your people strategy and hence starts the transition towards the culture your organisation seeks. And, of course, having the right organisational culture can make the difference between success and failure for any strategy.

How, then, could I tell the story of organisational core values and their hidden superpowers in the shortest possible book? I’ve started with a bit of a design pattern, that I hope might work for other minimus opus topics in the future (and may help you with your own minimus opus). My core values book is being written in two halves. The first half is a framework for thinking about and making sense of core values. This is like cognitive scaffolding. It provides a set of platforms to place ideas on. Platforms that relate to one another in defined ways. Platforms your thinking can move between using different thinking tools and methods. By the end of this part of the book, the reader should be getting comfortable with a vocabulary of core values and be making sense of what they are, what they are for and what makes the difference between good and not-so-good core values. On to the second half of the book. It is all about workflow. What work needs to be done, in which order and according to what logic in order to produce amazing and impactful core values for an organisation? What processes need to happen, and do they need to happen in a particular order? Who needs to be involved, both in consultation and in decision-making? What do you do next, once you’ve committed to a set of core values? And how do you ensure these core values are having the impact they were designed to have?

Having nearly finished the first half, I’m on course for an 80-page book with less than 20,000 words. That’s an hour and a half read for most people. It is minimus in terms of its conceptual breadth – it is an entire short book about core values. So, is it also minimus in the sense of the shortest meaningful treatment of its subject matter? In other words, could I have written less without loss of value? Probably, but not a lot less. It is certainly much more a minimus opus than a magnum opus.

Wish me luck and let me know if you would like to read a pre-print in early January and give me your feedback.

Goal Atlas gives you structured processes and tools to ensure strategy is adopted and impactful across your organisation. Get in touch if you think we might be able to help.

If you enjoy reading this newsletter, don’t forget to forward it to friends or colleagues who might also find it of interest.

Discover the content of past issues of Strategy Distilled.